While in Florida this past February, we spent 2 days at Disney’s Contemporary Resort. Ada is so obsessed with the Disney Princesses that I knew this would be a perfect trip for her right now. And since I’m still trying to get her familiar with the idea of travel, I want to make sure they are trips she is excited about. I know she probably won’t remember the details of the trip, most people recommend going when they are a little older, but I figured that since we have family that lives in Tampa, its a perfect time to visit them and give her a little taste of Disney.

2 days is definitely not enough, but at the same time, it was plenty! There was obviously only so much we could do in 2 days, and being that she is still so young we wanted to make sure we hit up the things she was most excited about.

Our first (half) day there we didn’t have tickets to the parks, so we checked into the hotel and played at pool all afternoon.

I then, neglected to make any dinner reservations for the first night, so we were left scrambling to find something. We thought about heading to Downtown Disney, but it just didn’t seem worth the hassle to pack everyone up and take the bus out. Instead we hopped the monorail and headed to the Polynesian Resort, where I wish we would have stayed. I remember staying there as a kid and so I wanted to show Dan, but we foolishly thought we could just walk up to a restaurant. Of course everything was booked. We were informed that the Kona Cafe had a first come, first serve bar seating area, and we somehow managed to nab three seats there.  After dinner we walked around, grabbed a famous Dole whip (the only place you can find them outside of Adventure Land in the Magic Kingdom), and we were able to catch the fireworks from the beach at the hotel. All things we just happened to stumble upon and probably couldn’t have planned any better.

I booked this trip 30 days out, and apparently that was not nearly soon enough. When booking the “Magic your Way” tickets and staying on a Disney property, reservations for restaurants and fast passes open up 60-180 days out, so everything I really wanted to do like Cinderella’s Table or Chef Mickeys, etc. was completely booked up, we had to be a little flexible. The only character dining I could get our first day was lunch at Hollywood & Vine inside Hollywood studios, which changed our plans quite a bit. Hollywood Studios wasn’t exactly on my itinerary this time around, but it ended up working out for the best. There was a lot more in that park for younger kids then Epcot, which was my original plan. The only reason I wanted to do Epcot was for the Frozen ride, but instead in Hollywood Studios we started our day with the Frozen sing-a-long, which was a perfect alternative. She got to see her princesses in real life, and it even “snowed” white foamy bubbles at the end, which was super exciting for her!

After the Frozen Sing-a-long, we did the Voyage of the Little Mermaid, this only had a short wait time and by the time it was over it was lunch time. That show was alright, she was excited to see Ariel live, but honestly in my opinion its time for Disney to update the theatrics, it seemed a little outdated, but to a 3 year old it was just fine!

Hollywood & Vine has the Disney Junior characters. So we saw Sophia the First, Doc McStuffins, Jake the Pirate and Handy Manny. They all make their way to your table at some point during your meal and it had a pretty decent buffet for lunch. She was just so excited the whole time! 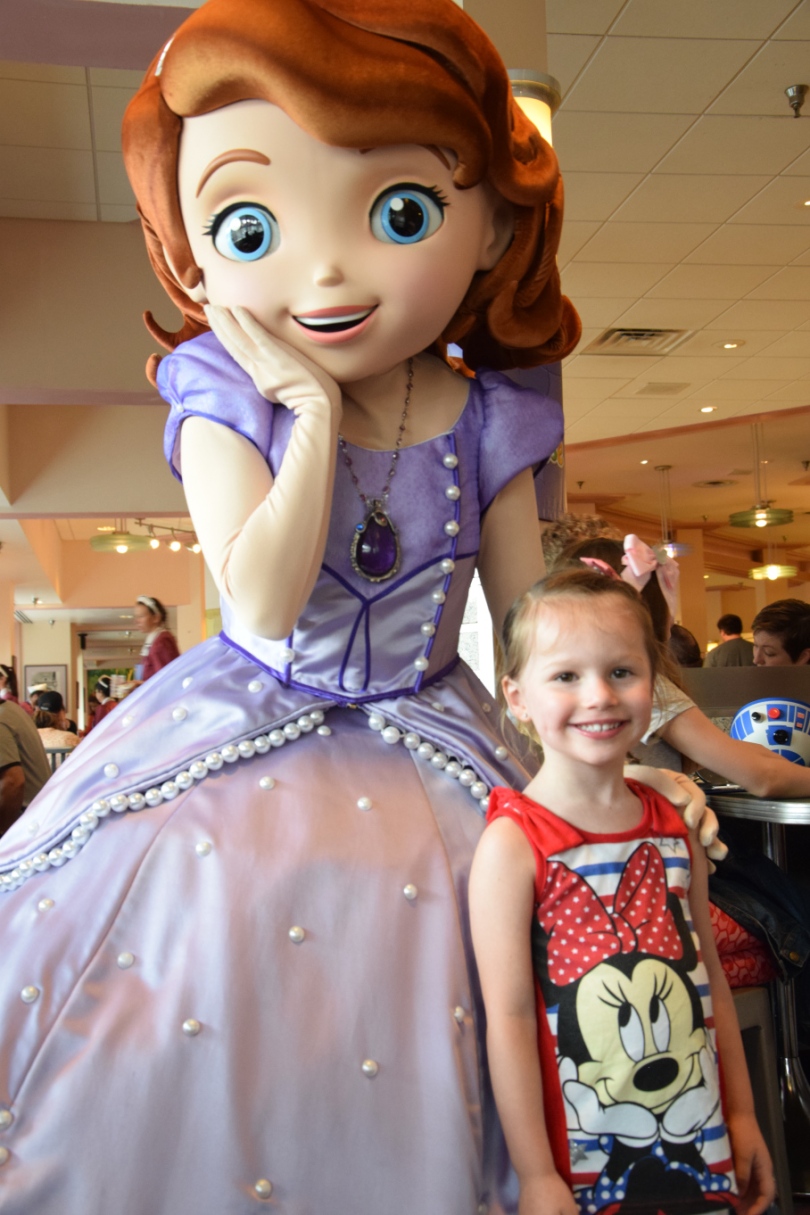 After lunch we debated trying to catch the Disney Junior Live! show, but decided that it was getting hot and we just saw half those characters so we headed back to the hotel for a nap. We did get to see Donald on our way out!

That evening, we had Fast Passes to Enchanted Tales with Belle. So after we were all refreshed we made our way into the Magic Kingdom for our first glimpse at the Castle! 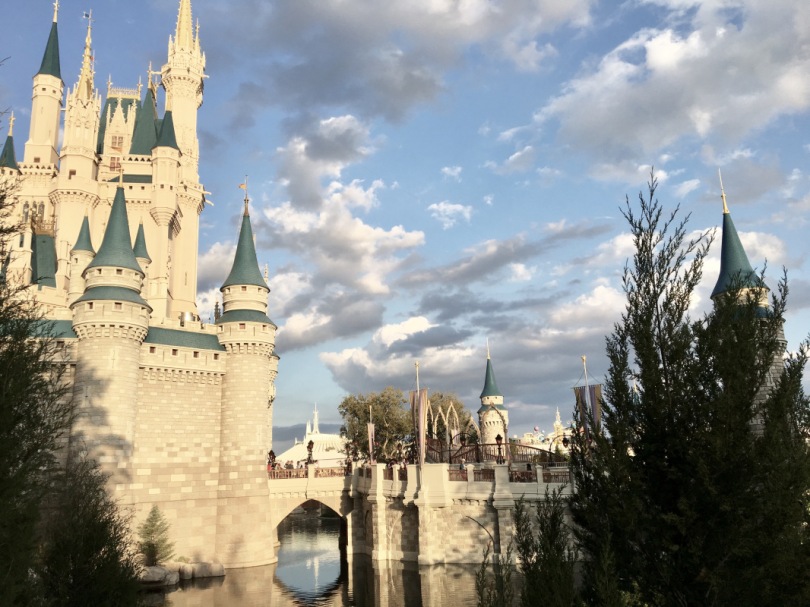 5:00 was a perfect time to head into the park because I think everyone was at dinner so we didn’t have to fight crowds to get to Belle on time. We did it right away at the early side of our Fast Pass time slot, and this was probably the cutest thing we did our whole trip and made such an impression on Ada. Belle is her most favorite princess right now, so I think she was literally star struck. The whole attraction though was just perfect for her, it was with a small intimate group, so you could really take it all in, and I felt like she actually got some cute, quality time with Belle up close.

After, we had some time and there was only a 20 minute wait at Ariels Grotto, so we waited a little bit for her to meet her second most favorite princess right now, Ariel.

We did a quick-service dinner and then it was time to get ready for the fireworks. Grandpa had sent her a gift card in the mail before our trip so we let her pick out a light up toy to play with while waiting for the fireworks, and then we caught the Wishes Nighttime Spectacular. So glad we got to see this since its coming to an end in May! She loved the fireworks despite thinking they were too loud! 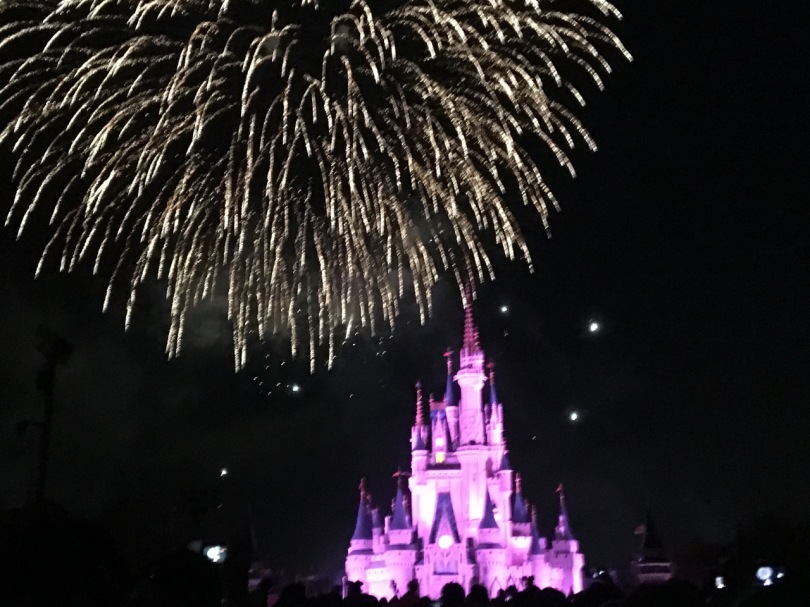 We went back to the hotel that night and somehow the girl was wired still, so we let her go run around in the splash pad until about 9:30, at which point we threw her in a warm tub to clean up and she passed out in about 30 seconds.

The next morning we got up early and made it to the Magic Kingdom again right at 9am when the gates opened, it was great timing as the lines were not yet too long and once inside, the park felt pretty empty. We even got to see Minnie as she was walking out! Perfect timing! (Main Street doesn’t look empty below, but the rest of the park really was!) 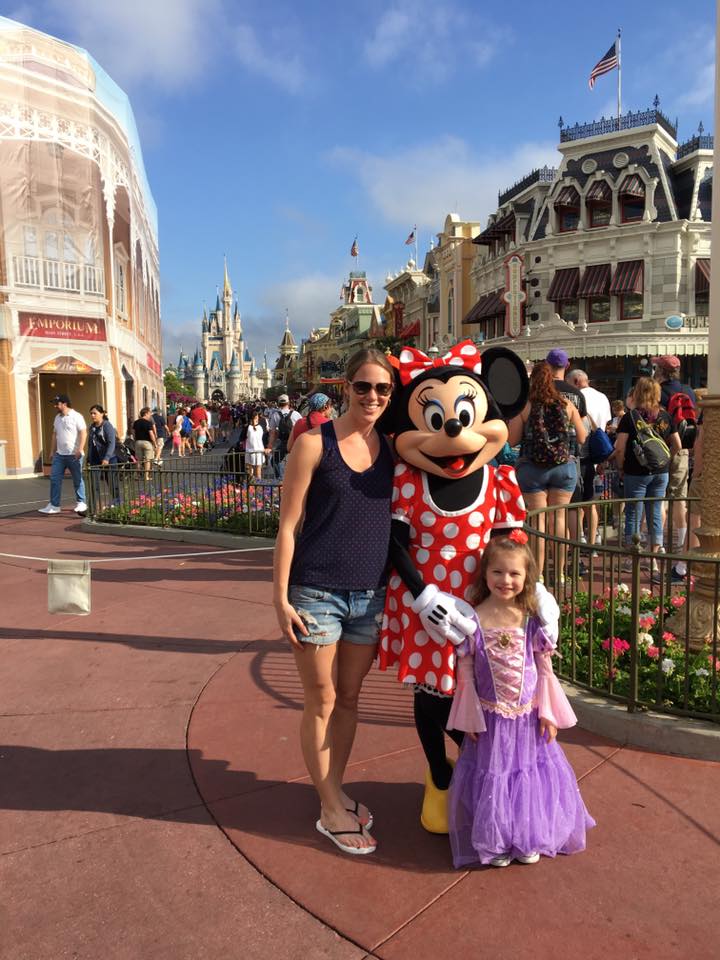 Our first stop was Fast Passes to meet Repunzel and Tiana. I’d read a lot about saving your fast passes until the afternoon, but there somehow was already a 50 minute wait and so I’m glad I didn’t take that advice and just got the Fast Pass for 9am. We were in and out in about 15 minutes and she was in her glory meeting both!

I had called Disney on the phone before our trip  to help me find restaurant reservations after I was becoming frustrated at the the fact that everything was booked.  Someone actually managed to get us into Chef Mickeys at 10:30am, it wasn’t in my mind the most convenient time but I really wanted Ada to dine with Mickey and Minnie, so we took it. (I think someone worked some magic because we were guests of the Contemporary Hotel, which is where this restaurant is located.  I can’t confirm this, but I don’t know how else we would have been booked there, when everything said no availability).  This is why we got to the park so early though and what prompted me to book a fast pass, I wanted to get something in before 10:30 breakfast. It involved some back and forth, park hopping, which with the convenience of the monorail made this not the worst scenario. When we left the park the gates were mobbed!! Never try to enter the park around 10:00-10:30 it was crazy! When we came back into the park again after breakfast/lunch around 12:30 the gates were dead again!

Chef Mickeys at this time was also actually a blessing in disguise. Because it was the tail end of breakfast, as people cleared out, no new guests were coming in because they were getting ready to turn over for lunch. So because there were fewer and fewer people, the characters we’re actually starting to come around again.

We spent the rest of that afternoon in the Magic Kingdom again, and it had gotten crazy busy and super hot! We had fast passes for the Monster’s Inc Laugh Factory, which was super cute and felt amazing inside because it was all air conditioned. We grabbed some ice cream en route to the Haunted Mansion, Ada loves scary things so she was super pumped for this. When we came out we were just in time for the afternoon parade!

All in all it was a great way to add to our Florida trip! Next time we plan to stay at the Polynesian Resort and actually just take some time to enjoy the hotel and some of the things around that don’t even require park tickets. There is just so much to Disney World without having to pay hundreds of dollars to go to a park and since we have the family in Tampa and go down so much, its not one of those “once in a lifetime trips”, we can actually just do small bursts of Disney a little at a time, which I think is totally the way to do it!